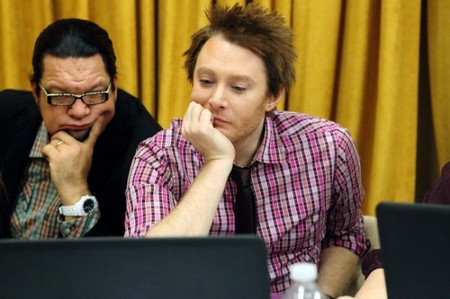 Tonight is an all new episode of Celebrity Apprentice on NBC.  The episode is called ‘Puppet Up’ and we will be live blogging it for you.  On last week’s episode still reeling from last week’s dramatic Boardroom, Lisa went on an emotional tirade Arsenio. With the whereabouts of an Aubrey still unknown, a verbal firestorm ignited.

In the boardroom Lisa really got our of line and I was shocked and disappointed that Donald did not shut her down.  Lisa attacked Lou Ferrigno after he finally spoke up  in the boardroom and called Lisa out for her vicious tongue.  Lisa made me feel very uncomfortable when she insulted Lou by disparaging his hearing loss disability which he has lived with since a very young age.  Did you think Lisa was out of line? If you missed the episode you can read our full and detailed recap here.

On tonight’s episode the celebrity players design two original puppets and perform an improvisational show with a Henson Alternative troupe. Dramas surround an outspoken contestant and a player who spirals downward after being marginalized in the task.  Rumor has it that Lisa Lampanelli and Paul Teutel, Sr. will be the project managers for this task.  Expect to see a cat fight because we have heard that Lisa and Dayana have an explosive fight.

We will be live blogging the episode with all the up-to-the-minute details at 8PM EST so make sure to come back to this spot and watch the show with us.  While you wait for the recap, check out a sneak peek of tonight’s episode below!