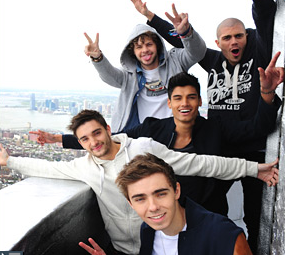 The Wanted are continuing to enjoy their trip to America from the top of the Empire State Building. The members of the band, Tom Parker, Max George, Siva Kaneswaran, Jay McGuiness and Nathan Sykes, toured the 103rd floor parapet. Yikes!

Jay, 21, talked about being in America, saying, “It does feel very nice, and we didn’t know if we came over here that America would like it because as much as we don’t try to be perfect all the time. We knew that America had an idea of boy bands and they might have expected ‘N Sync and nothing else.”

Well, this band of British rockers is far from the cookie cutter boy band. Chelsea Handler reffered to the band as the “anti- Jonas Brothers.” The boys performed at The Grove on Thursday, and then on Jay Leno on Friday (April 27). The Wanted will play a few more American shows, then will head back for European shows in mid-June.