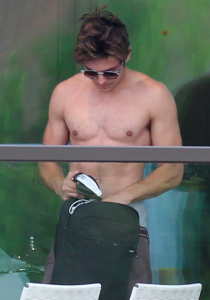 The actor has already been photographed by the paparazzi many times, mostly in boxers. After Efron was snapped standing naked with his back to the windows, he places towels over the ledge for more privacy so they could no longer see into his room.

The 24-year-old is in Sydney to promote his movie, The Lucky One, which comes out April 20. Rihanna is staying in the same hotel to promote her movie Battleship. The band One Direction will also be heading to Sydney tomorrow.