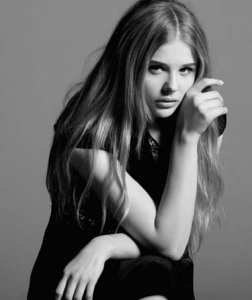 Chloe Moretz graces the cover of Flaunt’s “The Psychoanalytic Issue: Behavioral Patterns” issue. The 15-year-old actress chatted with the magazine about her future among other things.

When asked about how she chooses roles, she said, “I mean, yeah. I’ve done some kid stuff, but I mean I’m just driven to do stuff that is not ‘me,’ you know? … I just had a meeting with a director and I have three pages of notes on the psychology of the character and her thoughts and her past. It’s, like, as complicated as genetics.”

“I’m hopefully going to Columbia University,” she said of her hopes for college. “I want to do a minor in Art History and major in Criminal Psychology. I find criminal psychology incredibly fascinating and scary and how volatile the human mind can be. And I really love classical art, definitely. I mean, I’ve been to so many amazing places in Paris and London, and I’ve seen some beautiful pieces.”

When talking about her work in the fashion industry, she said, “I’m not doing campaigns yet. I want to wait a couple years, because I think if I do it right now, where am I going to go when I’m 20 and I’ve already done two campaigns or something? You know, I figure, why do everything so young and so fast? I’m only 15. Why rush everything? I’m saving a lot of stuff for later. A fashion campaign will come in due time.”

Valve Will have no New Announcements at E3