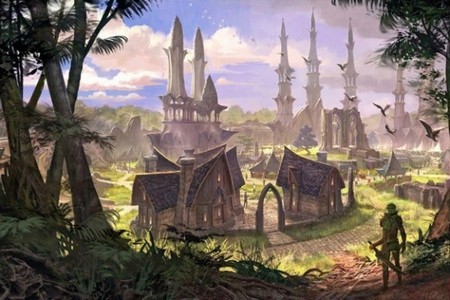 Just recently the Elder Scrolls Online had a teaser trailer released which showed nothing of what the game is going to look like. Though I’ve found out the playable three factions within the game. There are three factions and they consist of different races from all sorts of regions of Tamriel.

These races have formed an alliance to go against a fourth alliance which will be the antagonist of the game.

The Ebonheart Pact is a faction that will let you play as Nords, Dunmer and Argonians located in the Northern and Eastern regions.

The Aldmeri Dominion will let you play as Altmer, Bosmer and Khajiit which are located in the South and South West regions.

The Daggerfall Covenant gives you the opportunity to play as Bretons, Redguards and Orcs located from the North West regions.

For those of you who are wondering what about the Imperials? Well it’s sad to say but they won’t be playable in the game, but there will be NPC’s who are of that race. The Imperials work with the noble Tharn Family to aid in the Imperials ruling over all of Tamriel. The fourth alliance which is not playable and is the antagonist of the plot.

So far I have no idea how this game is going to turn out, since I’m more used to The Elder Scrolls being a much innovated single player RPG experience and seeing it being turned into a MMO is somewhat worrying. But I’ll make my final decision when there’s more information on the game.

‘The Hobbit’ Kills ‘The Lord of the Rings’ Tourism