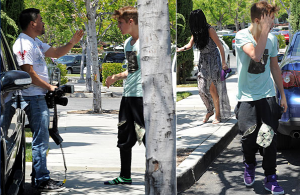 While Justin Bieber and girlfriend Selena Gomez were leaving the Calabasa’s Commens after catching a movie on Sunday (May 27), the celebrity couple was greeted with a swarm of paparazzi. One man got too close for Justin’s comfort and Justin attacked the man. Though there are many sides to the story, the cops are still unsure of what happened because Justin quickly fled the scene with Selena.

One source shared,  “Los Angeles County paramedics arrived at the Calabasas Commons with the Fire Department and Police arriving moments later following Justin’s altercation with a paparazzo. Justin’s bodyguard [also] arrived while the photographer received medical attention for an apparent strike to the face.”

The paparazzo sought medical attention and went to the hospital, where he was later released. The cops got the man’s statement, but are now looking for witnesses, as well as not only Justin’s, but Selena’s accounts as well. No word yet on what fines and punishments the Biebs could be facing, but he most likely will get off easy.

How do you think Justin should be charged?

Halo 4 Gets Dumbest Leaked Video Ever