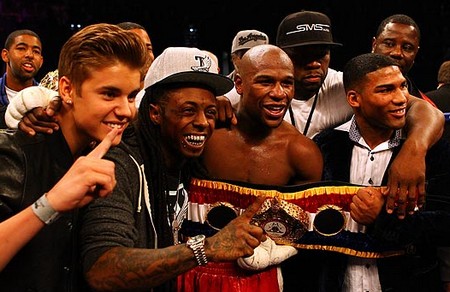 Justin Bieber got in the ring to congratulate Floyd Mayweather for his WBA light middle weight belt and I’m surely disappointed by this. Why couldn’t Mayweather just give the untalented brat a clean upper cut to the jaw. Now that would have been one awesome f*cking night, I’d even pay to see that!

Justin also had both Lil Wayne and 50 Cent join him in the ring and they posed for pictures with the new title owner, but once again I’ve got to say I’d love to see Lil Wayne get punched out too, I can’t stand both of their sorry excuse of music. I don’t mind 50 Cent, to be honest I do like a couple of his songs, but he could be doing better.

Both Mayweather and Bieber tweeted one another showing their mutual respect, Mayweather tweeted, “@justinbieber keep up the great work and thanks for the support #TheMoneyTeam. Enjoy the fight.” Justin tweeted, “@FloydMayweather Hard Work & Dedication. Congrats champ . Glad I could be a part of it.”

Yup that’s right! Floyd Mayweather doesn’t even run his own twitter account, his PR does, so I really and seriously doubt that he cares about this brat! Justin Bieber is just so arrogant, he didn’t deserve to be in the ring, what a f*cking joke!