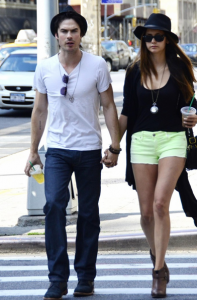 Nina Dobrev and her boyfriend/costar Ian Somerhalder walked around New York City holding hands on Sunday afternoon (May 13). The 23-year-old attended the “Like Me, Like Her” contest launch where she talked about her opinions on the possibility of starring in the film adaption of the risque book Fifty Shades of Grey.

“I don’t know if that’s a good idea,” Nina told MTV at the event. “I think it’s best for any of the actors on the Vampire Diaries to kind of do their own things … and create new characters. And as much as you try when you shoot a movie, if it’s two of the same people, the fans will always see you as … they’ll see me as Elena and they’ll see him as Damon if we do a film together. I think it would be better [if] either he should get it or I should get it. I know that apparently he’s really great for the role, so I hope that he gets it.”

I have not read the book, but from what I have heard about it, I would be quick to fill the role opposite my boyfriend for the sure to be R-rated movie. “All I’ve heard is that it’s very scandalous, to say the least,” Nina said.