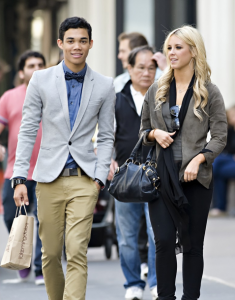 Roshon Fegan, 20, and his Dancing with the Stars partner Chelsie Hightower, 22, were spotted walking back to their hotel in New York City Thursday morning (May 8). When they were on their way to the Big Apple on Wednesday, Roshon tweeted “Going on planes and flying isn’t half bad and plus I have my partner chelsie with me haha #fun #planepranks just kidding can’t do that :).”

The Shake It Up star and the dancer made an appearance on Live! with Kelly early Thursday morning. They danced the Foxtrot for the talk show, but got voted off of DWTS the following night.

Chelsie tweeted after the talk show, “So fun doing @LiveKelly this morning make sure to catch it on abc. With @ROSHON Out shopping in NYC before our flight takes off.”

After being eliminated, Roshon and Chelsie were still in good spirits. “I’m definitely very happy that I can add ballroom dancing to my super-duper dance moves,” Roshon said.