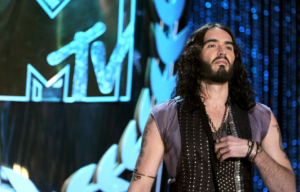 The 2012 MTV Movie Awards, hosted by the ever-risque Russell Brand, went off without a hitch tonight (June 3). In case you missed it, here is a brief summary of what went down:

The awards opened with a preview for Emma Watson and Logan Lerman’s The Perks of Being a Wallflower. Fun. kicked off the show by performing their smash hit “We Are Young”. In Brand’s monologue, he joked about other celebrities’ short marriages, attacking paparazzi, and making drunken fools out of themselves (all things which he points out he is known for doing as well).

Other awards included Instant Cult Classic for Project X, and Best Kiss for the fourth year in a row went to Kristen Stewart and Robert Pattinson.Harry Potter and the Deathly Hallows: Part 2 walked away with Best Cast, which Emma Watson had to solely accept on behalf of the over 200 cast members the movie had. Johnny Depp received the prestigious Generation Award and played guitar with The Black Keys. Emma Stone was also honored with the Trailblazer award for her efforts in acting.

Overall, I feel as if the awards were a complete cliche. From the opening act performing one of the most overplayed (but good) songs on the radio, to Brand’s  three-year-old Kanye West jokes (still, really?), the show seemed very forced. I think it has something to do with the awards being fan-voted, seeing that one movie took home over half of the awards. Also, if you watched, every presenter seemed to struggle to understand what the teleprompter was making them say because it was all so awkward. Who would of thought Kristen Stewart’s awkwardness would blend right in? While it was nice to see certain stars win awards they truly deserved, I was glad it was over after two hours.

Did you watch the show? What did you think?