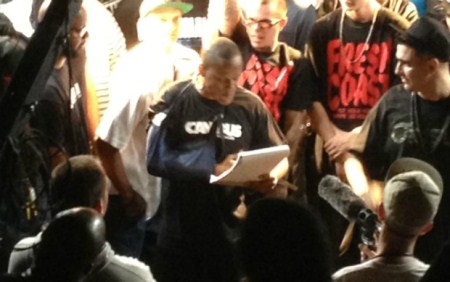 Canibus and Dizaster battled on King of the Dot, so first off for those who don’t know, King of the Dot is a league of rappers just battling each other seeing who has the better bars. Canibus was to be a guest on a live stream of “Vendetta: Battle Royale” against battle rapper Dizaster who is one of my favorites, so I was expecting something great from this battle since Canibus has awesome lyrics.

The battle went downhill for Canibus so bad, I was so embarrassed just for the guy to the point where it got so unbearable to watch. Canibus actually asked “Yo, y’all wanna hear this shit or not?” Followed with “Yo, don’t be a dick man. I came out here and you paid me my bread, they paid their bread…let me spit my shit!”

He admitted defeat during the battle and even brought out a notepad after that spitting some of his pre-written stuff; with the whole crowd booing him it was so hard to even watch the rest of the battle. I actually lost respect for the guy after this; it made it so hard to listen to his music knowing that this happened. If you’re going into a battle then prepare ahead a time and don’t look like some sort of fool, don’t even attend the event if you can’t even battle at all because he just hurt his career a lot with this failure.

Look at the footage and witness your respect just reach lower and lower for the guy.