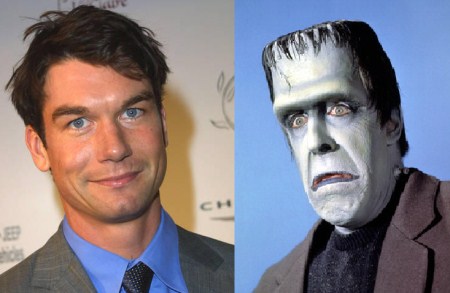 I was wondering who would be playing Herman Munster in The Munsters reboot, which is going to be called Mocking Bird Lane. I could quite believe that it could be Jerry O’Connell? Yes it is, of all people that is exactly who I would have guessed to play Herman Munster… not really, to be honest I’m quite shocked to see this, I never thought of that possibility at all.

Yup Jerry O’Connell will be joining the cast of Mocking Bird Lane, along side Eddie Izzard as Grandpa, Charity Wakefield as Marilyn and Mason Cook as Eddie. Currently Mariana Klaveno has been offered the role of Lily Munster who’s Herman’s wife. But it seems that Mariana might not be able to due to her needing to get out of a contract in the new drama Devious Maids by Marc Cherry.

Here’s a synopsis of this remake “[Jerry O’Connell will] play the family patriarch, the handsome and gangly Herman Munster, a great dad and devoted husband. He is married to Lily, a vampire, with whom he has fathered a 10-year-old boy, Eddie (Mason Cook). Strong but sentimental, Herman works at a funeral home, and worries that Eddie’s transformation into a werewolf and burgeoning awareness of his family’s origins will crush the boy’s spirit.”

I still don’t really see Jerry O’Connell as Herman… not at all, but the thing is, that’s my opinion for now since I don’t know how well he’ll play the role until It’s airing on TV and he might surprise us all by actually doing a good job. Who knows?