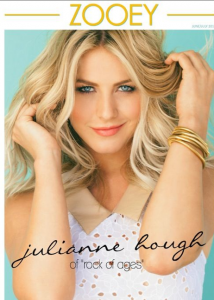 Julianne Hough, one of the stars of Rock of Ages, opened up to Zooey Magazine about her newfoud fame. A Dancing With the Stars champion, and blossoming actress, she revealed one of her greatest fears, and it has to do with her boyfriend of two years: Ryan Seacrest.

“I could care less if tabloids say I look fat, but the thing I get the most insecure about is when I hear, ‘Oh, it must be nice dating Ryan so you can do movies,’” Julianne told the magazine. “I’m like, ‘Yo! I’ve been doing this a lot longer than I’ve been dating him.’ I never want people to think I’ve gotten somewhere or gotten something I haven’t worked for.”

The 23 year old also revealed that she feels twenty years older than her age, and is ready to settle down and start a family. She gushed about how she has the perfect man, though there is a 14 year age gap, so could wedding bells be in the future? “At dinner we’ll always be sitting there explaining the reasons why we love each other. It’s corny and silly but it’s great. He’s one of the most thoughtful — not just boyfriends or men — but people I’ve ever met. A lot of the romantic things he does for me are sometimes not even specifically for me. He’ll remember my Mom’s birthday or that it’s Mother’s Day and he’ll send something.”
Share FacebookTwitterPinterest