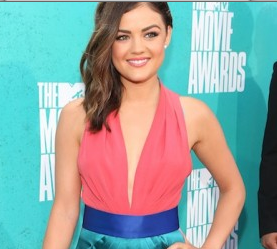 It looks like Pretty Little Liar’s actress Lucy Hale will be able to further pursue a music career, as she just signed a deal with Hollywood Records. Hale, who credits country music for most of her musical influence, is set to start recording later this year, with her album releasing in 2013.

Lucy released a statement saying, “I’m overjoyed and honored to become a member of the Hollywood Records family. I’ve admired the careers they’ve made and can’t wait to see how my musical path is paved out. I’d just like to thank Ken Bunt and everyone involved for giving me the chance to show a whole different side of myself, which is a huge passion for music.”

Ken, the Executive Vice President for Disney Music Group, added, “Lucy’s immense talent and passion for music make her a great fit for the label. We’re very excited to be working with her.”