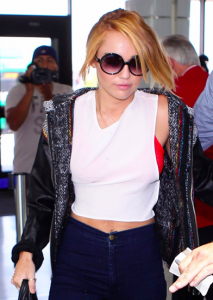 Miley Cyrus shows off her tummy in a crop top and high-waisted shorts as she makes her way into LAX in Los Angeles on Thursday afternoon (June 7). The 19-year-old was on her way to meet her new fiance Liam Hemsworth, who is in New Orleans filming a movie.

It has recently been revealed that the newly engaged actress/musician is working on a new album. It is believed we will see her album release before we see her walking down the aisle. A source shared that Miley is “quietly working on her next studio album, which is going to be very adult and sexy and believable.”

Miley recently ditched her old manager that she has had since her Disney days, and now is teaming up with Bruce Floh. She is reportedly “having fun making music” for “the first time in her career.”