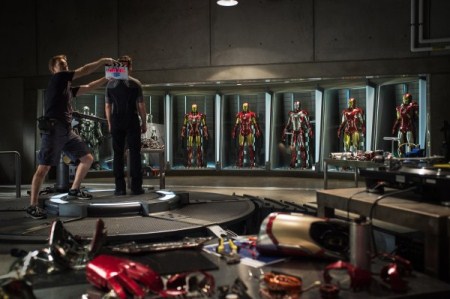 Iron Man 3 starring Robert Downey Jr is currently being filmed in Wilmington, North Carolina for the past couple of weeks now. The only thing we’ve gotten is a picture of James Badge Dale wearing the Iron Patriot armor, the thing is, it wasn’t an official picture. Luckly today we’ve been given an official picture of Tony Stark looking at all the types of armor he owns and my god do they ever look bad ass.

This picture goes to show how much of a big success The Avengers; which was one of the best movies I’ve seen in a while and I advise you to go see it if you haven’t… Anyways this will be the third installment in the Iron Man series and we have also learned that John Toll will be the director of photography from Mathew Libatique who worked with the previous director of Iron Man 1 & 2.

Iron Man 3 will be releasing into theaters on May 3, 2013 and I have a feeling it is going to be an absolutely amazing movie, just like the first. The second, don’t get me wrong, was a very good movie but it wasn’t as great when compared to the first that really blew my mind.

I can’t wait for Iron Man 3, he is an awesome superhero and Robert Downey Jr is an amazing actor, though I’m still more excited for The Amazing Spider-Man.