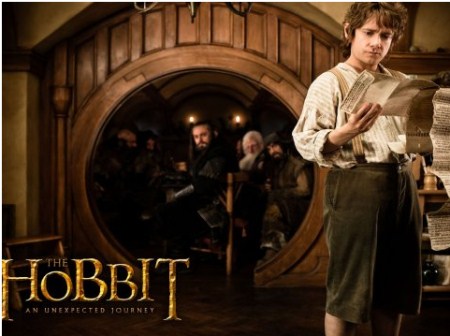 Now if you are a huge fan of Middle-Earth in general and cannot wait to see The Hobbit: An Unexpected Journey then you will be happy to hear that a new production vlog for the film has now been released. Kind of funny really since It was just yesterday where I said that I can’t wait for this film to come out and this just makes me want to get a way to attend the premier even more.

Now the greatest thing about Peter Jackson’s vlogs that show behind the seen footage is that it’s more in depth and shows us a whole lot of what they’re doing for the film and the people who are a part of the film. This time his production vlog gives us a tour of Stone Street, showing us the stages and the many departments that are working on the film behind the scenes.

The whole thing is extremely entertaining I actually have watched it more than four times. I highly recommend you watch the whole thing especially the ending it is by far the funniest and coolest thing I’ve seen in a long time.

The Hobbit: An Unexpected Journey will be releasing into theatres on December 14th 2012 and I’m serious when I say this, it’s going to be an amazing movie and you cannot miss it.