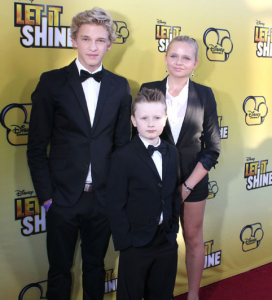 Siblings Cody, Alli and Tom Simpson all attended the movie premiere of “Let It Shine” on June 5 at The Directors Guild Of American in Los Angeles, California. They were all matching in black and white. Other stars at the premiere included Ariel Winter, Kelli Burgland, and Calum Worthy.

A description of the movie states, “The film follows a shy, talented musician who pens romantic hip-hop verses only to stand idly by as they’re delivered to the girl of his dreams by a proxy.”