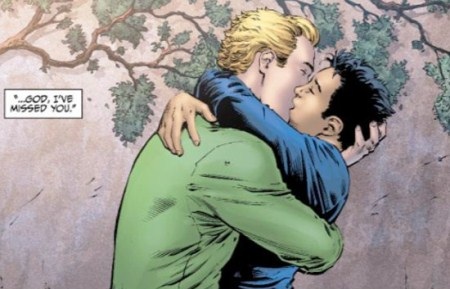 DC Comics has announced that the Green Lantern will now be coming “out of the closet” for the world to see, from a heterosexual husband and father, Alan Scott is now gay!

The writer, James Robinson, for “Earth 2” said “It’s a realistic depiction of society; you have to move with the times.” For the past 70 years the Green Lantern has been straight and now out of nowhere, he is revealed as a homosexual in the next issue of Earth 2, it’s a no brainer to realize it since he gives his boyfriend a welcome home kiss… Of course with this change, they will be making the Green Lantern much younger, which means his son is no longer in the story, who was gay, but now they’ve decided to just make Alan Scott gay instead.

James went on to say “The only downside of his being young was we lose his son, Obsidian, who’s gay. So I thought, ‘Why not make Alan Scott gay? That was the seed that started it.” When Robinson brought his idea up to bosses at DC, they signed off on it right away.

As you can tell I’m not a big fan of this sudden change, though I’m not too much of a fan of DC either. I just hope that this doesn’t encourage other Superheroes to all of sudden become gay because for me it’s quite a let down to the history of the story, you just can’t turn the clock back 70 years and decide someone is gay. It would have been better for DC Comics to introduce a new super hero that was gay.