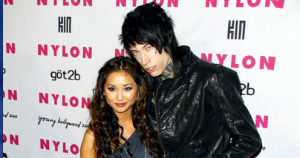 Brenda Song and Trace Cyrus announced their engagement last year after rumors were circulating that Song was pregnant. Now, the couple has decided to call the wedding off and broke up after two years together.

At the time of the engagement, Cyrus said, “When I asked her (to marry me), I told her, ‘I don’t care if we get married tomorrow, two weeks from now, a year from now or 10 years from now; it doesn’t matter,” he told People magazine at the time. We feel like we’re almost married right now.”

Trace said in a statement Monday, “Brenda and I have decided to go our separate ways. We split up a couple of months ago. We will continue to focus on our careers. I wish Brenda the best and much success in the future. I hope everyone can respect our privacy about this situation. Thanks so much.”

Wonder if Trace’s little sis Miley will have the same fate with her engagement.