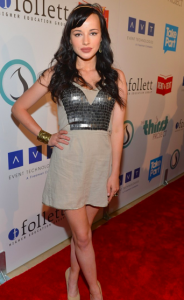 Awkward. star Ashely Rickards, 20, looks sophisticated as she walks the red carpet at the 2012 Outfest opening night gala screening of Vito. She attended the event in the Orpheum Theatre on Thursday night (July 12) in Los Angeles with  Carter Jenkins.

The Insider recently caught up with the star about season two of the hit show. Jenna shared, “This season, one might say there’s more drama, but, like you say, we’ve explored the characters in the first season so now the stakes are higher with every relationship Jenna has. There are more secrets than ever, so there’s the potential for bigger fallout from that.”

She also added of her character, “Last season, Jenna was the underdog, this season she’s the every-girl. She never expected people would ever see that blog – hers is one of millions of blogs, but someone sees it and starts talking to her about it. Her blog is the most intimate and inside Jenna’s head we can get. So when this happens, it means there’s someone who knows all her intimate thoughts, which is scary, but they’re also giving good advice, so there’s a lot of emotions revolving around it.”