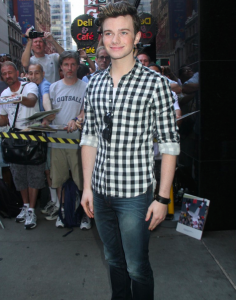 Glee star Chris Colfer arrived on the set of Good Morning America on Tuesday (July 17) in NYC looking casual in a checkered shirt and jeans. Crazy fans outside the studio greeted the star upon his arrival.

Chris appeared on the show to promote his new book “The Land of Stories: The Wishing Spell.” He also tweeted, ““It’s a young adult novel, but I think anyone of any age will like it. No need to kidnap a child to validate the purchase.”

The Golden Globe winning actor has been planning the fantasy novel since he was ten. The book released across the world on Tuesday.