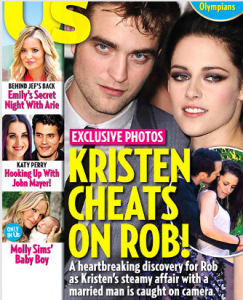 Looks like its trouble in vampire paradise for the long-time Twilight co-star couple Kristen Stewart and Robert Pattinson. It has recently been discovered that Stewart,  22, cheated on Pattinson with her 41-year-old Snow White and the Huntsman director, Rupert Sanders.

The incedent was described as a “marathon makeout session.” No word on whether the couple have decided called it quites, or get past it. Sanders also has a wife of seven years.

Stewart released an apology stating, “I’m deeply sorry for the hurt and embarrassment I’ve caused to those close to me and everyone this has affected. This momentary indiscretion has jeopardized the most important thing in my life, the person I love and respect the most, Rob. I love him, I love him, I’m so sorry.”

No matter what the couple decides to do, they are stuck promoting Twilight Saga: Breaking Dawn- Part 2, which comes out in theaters November 16. They were last spotted together at the 2012 Teen Choice Awards.