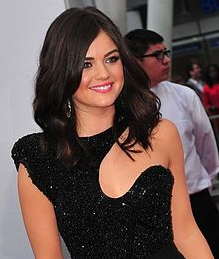 Lucy Hall recently signed a record deal with Hollywood Records, and the 22-year-old Pretty Little Liars star is wasting no time getting started. She is currently collaborating with Sugerland’s Kristian Bush. The duo worked on her debut country album in Bush’s studio.

Bush described Lucy to CMT as “sound[ing] like Carrie Underwood- strong with a blues side and a pop side to it. And a lot like Faith Hill.” He also sees a very bright future for Hale. “As she gets more comfortable, her voice will get even stronger, and you’ll hear more powerhouse stuff, but stylistically she lives in that range [and] she has a really good grasp of her own story she wants to tell of growing up in Memphis. Lucy is a natural,” he said.

Lucy also talked about the experience, and how she enjoys playing a character while acting, but being able to completely open up in her music. “It was a really cool collaboration, because we drew things from each other,” she said.