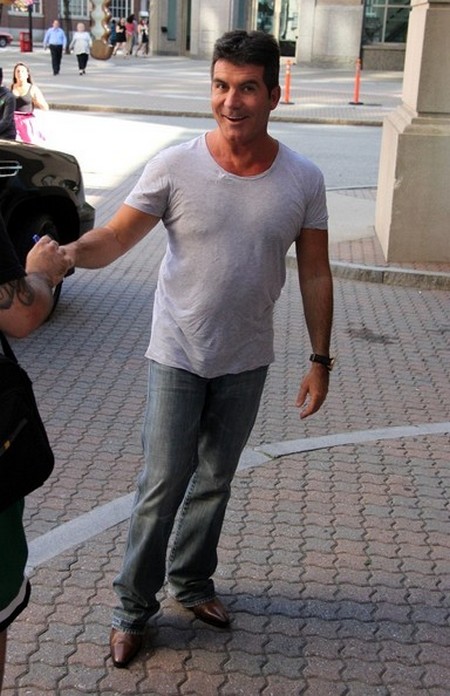 Simon Cowell had a fun stab at Demi Lovato last night at the Teen Choice Awards. In a pre-recorded video message, Simon said, “She’s annoying, obnoxious, disruptive, gobby, irritating, bad manners, not great taste – did I say irritating? Yes? Annoying, very annoying. She’s a brat. I could go on for hours, but that’s what makes her special, and I really do love her, a bit. Have a great night, wish I was there, but no one invited me.”

Demi hit back and said to Simon, “He’s just old. He isn’t used to women in this century being able to say what they want.”

The night was not all fun and games and endless pleasure, because Demi did a rendition of her “Skyscraper” single and dedicated the song to the victims of the recent Aurora, Colorado Dark Knight Killings. In a poignant and poetic moment, Demi stopped the song halfway through and said to the audience, “It’s really heavy on my heart today. A lot of you know what happened in Colorado at midnight last night. I just want to make sure we can get through this. And my heart goes out to Colorado – this song is for them.”

Celeb Teen Laundry gave a listen to the single (again) and the lyrics truly become an unparalleled artistic reference to the recent horrific gun murders at the “Dark Knight: Rises” premiere.

Simon Cowell and Demi Lovato’s Machiavellian fight for control of the judging panel is rumoured to be quite controversial and exciting. We cannot wait for the new season of the US X-Factor, where all decency will be thrown out of the window. We all remember last season’s dramatic result shows and Simon’s incessant disagreement with the panel. Let’s throw Britney Spears and Demi Lovato into the mix and close our ears to the unholy battle cries!

What do you think CTL readers? Will you be watching the new season? Let us know in the comments below.