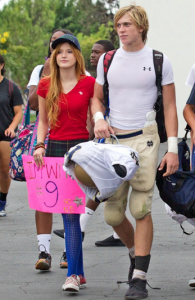 Bella Thorne threw on her cutest school girl outfit to cheer on her boyfriend, Tristan Klier at his football game in Los Angeles on Friday (August 23). It turns out that the 14-year-old Shake It Up star wasn’t just there to see Klier perform, but she was cheering (with a homemade sign reading “‘I’m with #9”) for the team to win for charity.

Bella tweeted, “No pressure @tristanklier89, @cameronklier48, @kswanson469 but the kids need a win for a donation for athletics!” Later she added,  “So we lost this game:( but last week we won! So NDHS JV team still wins a school in need $500! More games to come!”

The Disney star is reportedly donating $500 out of her own pocket for each win that Klier’s team has, and will be donating the money to a school in need of athletic equipment.

Are Taylor Swift and Conor Kennedy Thinking Of Marriage