Breaking Dawn: Part Two to Have Different Ending than Book 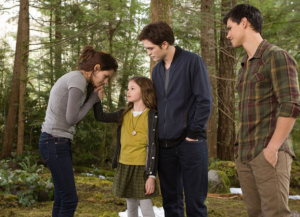 Robert Pattinson and Kristen Stewart’s break-up has seemed to add even more drama to the November release of the final installment in the Twilight movie adaptions: Breaking Dawn- Part 2. The exes recently revealed to Entertainment Weekly that if we were expecting the movie to be an exact mimic of the book, then we are in for a surprise. As it turns out, the movie will have an alternate ending from the book’s.

A new twist will be added to the last movie, but fear not. The changes were made by none other than author Stephenie Meyer, so we know they were made with the fans best interest in mind. Pattinson shared, “When I first read the script, I got to that part and was like, ‘What?’ And then I had to go back a page. It does it a serious justice.”

Stewart, who happens to be a big fan of the books, added, “It’s clearly made by someone who really likes [the saga], who really cares.“
Share FacebookTwitterPinterest