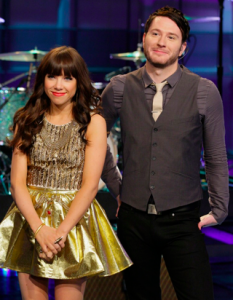 Carly Rae Jepson and Adam Young of Owl City teamed up for a performance on  The Tonight Show with Jay Leno in Los Angeles on Tuesday night (August 28). The pair performed their duo “Good Time” for the late night show.

Carly, who is most well known as the singer of the catchy song “Call Me Maybe,” recently opened up about all the crazy covers of her hit. The Tonight Show with Jay Leno in Los Angeles on Tuesday night (August 28). “The Harvard baseball team was pretty insane,” she said. “They did the hand gestures and I wasn’t really expecting that, and the SMU women’s crew was pretty insane as well.”

The 26-year-old is set to appear on Conan on Wednesday, August 29th. Carly’s first album, ‘Kiss,’ is set to drop on September 18th.