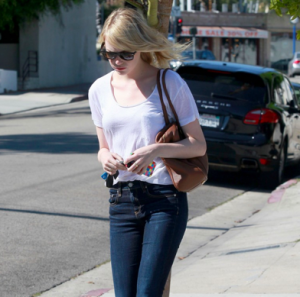 Emma Stone was seen leaving Andy LeCompte salon in West Hollywood, Calif. on Wednesday (August 29). The star recently revealed some interesting news to Interview magazine: that she was almost going to be known as Riley Stone (which is a great name, if you ask me)!

The 23-year-old, whose real name is Emily Stone, reveals the mini crisis she went through when trying to pick a stage name, after her real name was already taken in the Hollywood world. “I was 16 at the time, and I hadn’t done anything yet, so I was like, ‘I can be whatever I want to be. What name do I want to have?’” she shared.

“So I went though a list of names and picked Riley,” she added. “But then I had an identity crisis pretty much right after because I had a guest part on Malcolm in the Middle and everyone kept on yelling, ‘Riley!’ and I didn’t know who they were talking to. So I had to change my professional name to Emma, which my mom always called me.”

Are Emma Stone and Andrew Garfield Expecting A Baby? Read Below To See What Kind Of…