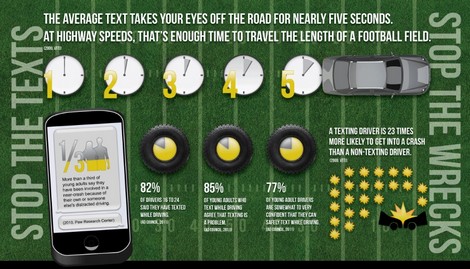 Earlier this year, the Golden Globe winning series, GLEE,  made headlines when a pivotal cliffhanger episode ended with a shocking and catastrophic crash due to texting and driving. Quinn Fabray (Dianna Agron) was driving to her friends’ (Rachel and Finn, played by Lea Michele and Cory Monteith) wedding when a she received a text. She took her eyes off the road to read it and to type the words “On My Way” for a matter of seconds, but in her distraction she swerved out of her lane and was hit in a tragic accident by an oncoming vehicle. It was months before the audience and “Glee’s” millions of young adult viewers would know the fate of her character, but the message was clear: texting and driving can have horrific consequences.

The new television and digital PSAs employ this powerful scene to emphasize that five seconds is the average time your eyes are off the road while texting and driving – when driving at 55 miles per hour, that is enough time to cover the length of a football field. The PSAs direct young adult drivers to the Texting and Driving Prevention campaign web site, StopTextsStopWrecks.org, where teens and young adults can find facts about the impact of texting while driving and tips for how to curb the behavior.

NHTSA reports that in 2010, more than 3,000 people were killed and an additional 416,000 were injured due to distracted driving, which includes texting while driving. The “Glee” PSAs are part of NHSTA, the State Attorneys Generaland Consumer Protection Agencies and the Ad Council’s national Texting and Driving Prevention PSA campaign. Launched in October 2011, this campaign is designed to curb the behavior of young adults who text while driving, address the compulsion of this behavior and demonstrate to overconfident young adult drivers that it is not safe to text while driving.

“Texting and driving is an epidemic on America’s roadways, but these crashes are preventable. Distracted driving does not just happen, it’s a choice,” said U.S. Transportation Secretary Ray LaHood. “The first line of defense must be personal responsibility by all drivers to put theirwireless devices away and keep their focus on the road, which is why we are working closely with our partners to build public awareness around this important safety issue.”

“This was a story we wanted to tell because we know the influence our show can have in starting conversations and raising awareness,” commented “Glee” executive producer and co-creator Ryan Murphy. “We were inspired by Oprah Winfrey’s campaign encouraging everyone to sign a pledge not to text and drive, which we all signed when we did her show a few yearsago, and we had been looking for an opportunity to tell the story of how a few seconds of carelessness could have a devastating impact on people’s lives. We’ve already heard from thousands of our fans how this story touched them, and we loved the idea of a PSA campaign to keep this important issue front and center.”

“’Glee’ has always told stories that speak to young people in an incredibly entertaining way, provoking conversation and raising awareness in the process,” said Dana Walden and Gary Newman, Chairmen of Twentieth Century Fox Television. “When Ryan and the producers told us they were going to tackle this issue, we knew that beyond telling agreat, dramatic story about our characters, it could have very real impact on the lives of our viewers. We couldn’t be more proud of the work they and the cast have done on this incredible series.”

According to a new, national survey conducted by the Ad Council, there has been progress with the attitudes and behaviors among young adult drivers regarding texting while driving. Fifty-one percent of young adult drivers report that they are “extremely concerned” about their peers texting while driving, which represents an increase of seven percent since September 2011. Most notably, in regards to their current behavior, thirty-four percent of respondents said that they never text while driving, a significant increase from twenty-eight percent in 2011.

“Driving is one of the most dangerous activities for young adults. Texting while driving is a distraction that young drivers can live without,” said Connecticut Attorney General George Jepsen, the father of two teenage boys. “Drivers of any age should be aware that texting while driving may not only jeopardize the safety of themselves and others, but it can violate state motor vehicle laws against distracted driving and result in hefty fines or loss of driving privileges.”

“We are thrilled to join Twentieth Century Fox Television, Twentieth Century Fox Home Entertainment and ‘Glee’ to unveil a new series of public service ads to further extend our texting while driving prevention messages to their vast audience of young adult drivers,” said Peggy Conlon, president and CEO of the Ad Council. “Our latest research shows a nation that is now on the right track in improving the safety of our roads, but there is still more work to be done. We will continue to broaden our campaign messages to help reduce driver distraction, prevent injuries, and ultimately save lives.”

Since 2006, the Ad Council has partnered with the State Attorneys General to address reckless driving among teens. The “Stop the Texts. Stop the Wrecks.” campaign effort has received more than $20 million in donated media support to date. For more than twenty-five years, the Ad Council and NHTSA have worked together on consumer safety PSA campaigns. Per the Ad Council’s model, all of the new PSAs will run and air in advertising time and space that is donated by the media.