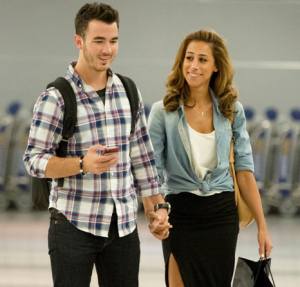 Kevin and Danielle Jonas were both smiling big as they arrived at JFK Airport in New York City hand in hand on Friday (August 17). The couple recently chatted with USA Today about how their relationship budded after meeting in the Bahamas on vacation.

Danielle revealed, “My younger sister knew she had saw him in a magazine and [she] gave him my number. And the minute I landed [back in New Jersey], because he likes to stalk, he called. From then on, he called me every day.”

The couple’s new reality show, Married To Jonas, premiered tonight on E!, and the cameras showed the Jonas brothers back in the studio, an awkward Jonas family meal, and Danielle’s crazy parents.