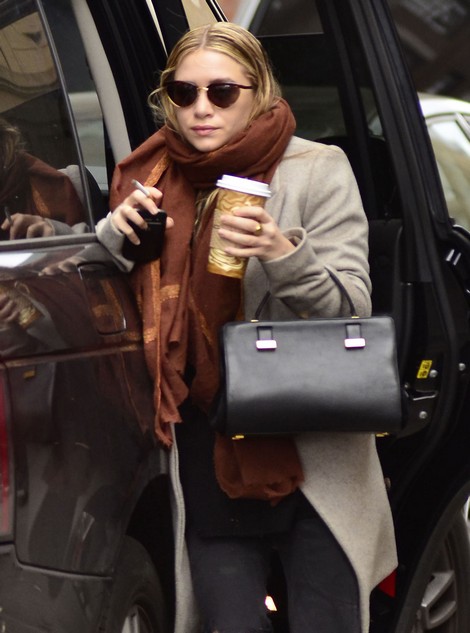 Mary-Kate Olsen has often gravitated towards older men but her most recent boyfriend has her sister Ashley more than a little worried.  Reports are surfacing that Mary-Kate is moving in with her divorced, father-of-two investment banker beau, Olivier Sarkozy.  Her new man has reportedly paid over $6 million for a historic Manhat­tan townhouse that boasts nine fireplaces.  The two are supposedly testing out a “trial marriage” of sorts, something that has Sarkozy’s ex-wife Charlotte, reeling.

She told the National Enquirer that she thinks the new couple are “grotesque” and mentions how Mary-Kate was only 11 when Charlotte and Olivier married.  Ashley is also unsure of the pair, according to the Enquirer.

“Ashley is incredibly happy that Mary-Kate has found a love connection with Olivier, but Ashley has more experi­ence dating older guys, and she’s warned Mary-Kate to slow down.  She doesn’t want Mary-Kate rush­ing things by moving in with a divorced man who has two chil­dren.  “But Mary-Kate was only 11 years old when Olivier married Charlotte,” said the source. “Ashley just wants to watch out for her.”

Is it wise for Mary-Kate to be moving so quickly with Olivier?  Do you think this couple is the real deal or will a trial marriage lead to a real disaster?  Is Mary-Kate really ready to take on the responsibility of Olivier’s two kids, even on a part-time basis?  Is Ashley right to want her sister to slow down?  Tell us what you think in the comments section below!

Mary-Kate and Ashley Olsen Want Their Handbags To be Affordable