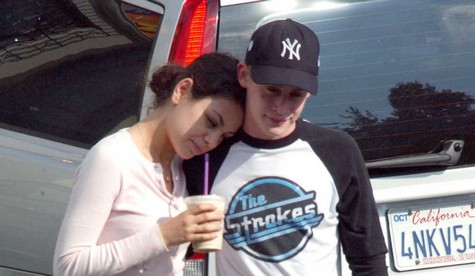 Mila Kunis dated troubled Hollywood actor, Macaulay Culkin, for eight long years before his demons caused her to walk away for good.  The former child star is reportedly battling a serious Heroin addiction, as well as a $6000 a month pill popping problem.  He has been photographed vomiting into bushes and his gaunt appearance makes it pretty obvious how he has been spending his time.  According to the latest issue of The National Enquirer, Mila actually reached out to her troubled ex hoping that she can somehow help him.

“Ashton convinced Mila to call Mac during their getaway in Bali,” a source close to the “Ted” hottie told The ENQUIRER. “So Mila had an assistant track him down on the phone. When she final­ly heard Mac’s voice, she burst into tears. The “Black Swan” beauty, 29, “poured out her heart” to Culkin, 32, over her wor­ries about him, said the insider. “Then Mila begged Mac to seek treatment at rehab,” the insider continued.

“She desperately tried to make him understand that it was not too late for him to get well.” BUT Culkin – who played a drug–addled club promoter in the 2003 drama “Party Monster” – ignored her pleas, said another source. “While Mila was going on about how a long, intensive stint in rehab would help get his career back on track, Mac played dumb,” the second source told The ENQUIRER. “He kept saying, ‘I don’t know what you’re talking about, Mila. I’m doing great.’  Mila knew that Mac was a mess after their breakup, but she had no idea his drug use was so severe,” noted the insider. “She’s praying that he gets help before it’s too late.”  The second source added: “Mila couldn’t have imagined how low Mac had really sunk. She thought he was partying and drinking, maybe smok­ing pot – but nothing more. The reports about heroin abuse freaked Mila out.

“Now she has her fingers crossed that Mac will follow her advice and get help. She’s petrified of get­ting the news that Mac has overdosed again or, worse yet, died.”

It’s interesting that Mila’s down low boyfriend, Ashton Kutcher, is the one who encouraged her to make the phone call.  Mac must be in really rough shape for her new man to fully support and encourage contact!  Do you think Mac is as bad as the reports are saying?  Will he get help in time or do you think he’s on his way to being Hollywood’s next loss?  Tell us your thoughts in the comments below!