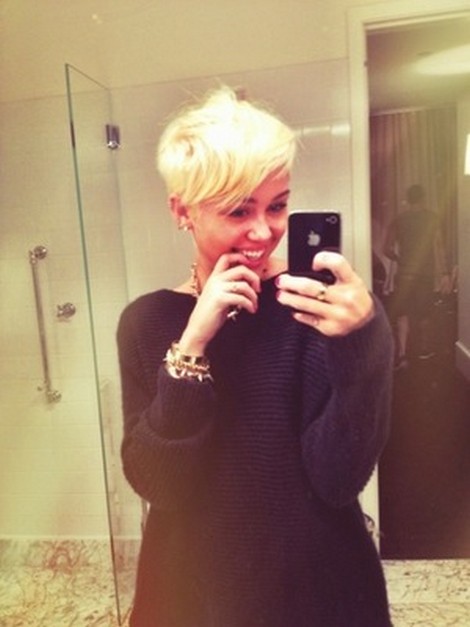 Miley Cyrus recently trimmed her long locks and dyed them blonde – no big deal right?  Well apparently that wasn’t all she had planned.  The former Hanna Montana star officially completed her transition from Disney sweetheart to hard rock’n momma by completely chopping her locks off, turning them into quite the punky ‘do.

The ‘Twiggy’ inspired look might not suite some, but I kind of like it.  It’s also very Ashlee Simpson-esque.  Also, anyone who has the guts to do it is in my books already.

Miley took to Twitter to let her fans know that some sort of big transformation was on the way.  Last Monday, the 19-year-old tweeted that she was “ready for a change”, and yesterday she cryptically tweeted “it’s happening” – leaving fans curious as to what exactly she was intending on doing.  She is recently engaged to fiancé Liam Hemsworth after all, so was it early nuptials for the young lass?  Nope, just an epic hair cropping.

After her strands had been snipped by famed stylist Chris McMillan, she had this to say:

“Never felt more me in my whole life ❤”

I wonder what Liam thinks of the new Miley….let’s hope he likes it.  Next up for Miley is a recurring role on Two and a Half Men, where she will guest star on the sitcom as a love interest for Angus T. Jones’ character.

So what do you think?  Like I said, I’m digging it…kind of makes me want to chop my own luscious locks!  As if I had the guts..