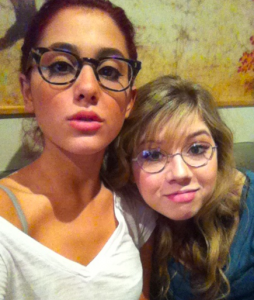 After iCarly comes to an end this year, Jennette McCurdy will be starring in her own show. If that isn’t exciting enough, her costar is going to be none other than her real-life bff, and Victorious actress, Ariana Grande.

Entertainment Weekly officially broke the news that the two Nickelodeon stars would be teaming up for the spin-off, in which McCurdy will keep her iCarly character of Sam, and Ariana would stil play Cat from Victorious. Dan Schneider, who is the creator and executive producer for iCarly, will be the mastermind behind the new spin off.

After news of the show broke, Grande tweeted, “Can’t thank @DanWarp @JennetteMcCurdy and @NickelodeonTV enough 4 this opportunity..I’m so excited about this show I could cry. #SamAndCat.”

Currently, the show is called Sam and Cat, but nothing is set in stone (I hope they come up with something more creative). In the show, the two will move in together and start up their own babysitter business in order to make some money. The pilot will be filmed this summer, with a release date still not set.