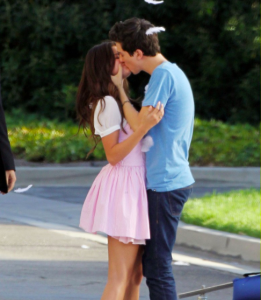 Shortly after Justin Bieber had to lock lips with another lady for his music video, his girlfriend Selena Gomez, 20, was spotted kissing Nat Wolff on set for her upcoming movie, Parental Guidance Suggested.

The two were seen kissing in Sherman Oaks, Calif. on Friday (August 10) while on set for the movie that is a film adaption to Ric Browde’s novel “While I’m dead…Feed the Dog.” The movie follows Nat, 17, and Selena’s characters as they deal with the struggles of super stardom, as well as typical teenage issues.

While Justin, 18, has visited the set before, we have to wonder if he sat this scene out. After all, who wants to see their girlfriend kissing another leading man?