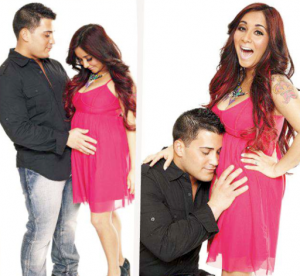 You can breath a sigh of relief, or crawl into a hole, because Nicole “Snooki” Polizzi is now officially a mother. The “Jersey Shore” star’s rep told Access Hollywood on Sunday, “Lorenzo Dominic LaValle has entered the world weighing 6lbs, 5oz. Nicole, Jionni & Enzo are doing great!”

The 24-year-old mother tweeted on Sunday,  “I am SO IN LOVE with my son Lorenzo Dominic! I had my little man last night, healthy at 6lbs! HE’S MY WORLD!” Lorenzo, the worlds newest guido, was born at 3 AM in Saint Barnabas Medical Center in Livingston, New Jersey on Sunday.

As for the reality star’s opinion on her baby’s fame? Of course she is going to try and milk as much money out of him as possible. Of putting the birth on her reality show “Snookie and Jwoww”, Snooki said, “I think I want it to be filmed – maybe I think I’ll have Jenni film it.”

Miley Cyrus Lands Guest Role on “Two and a Half Men”