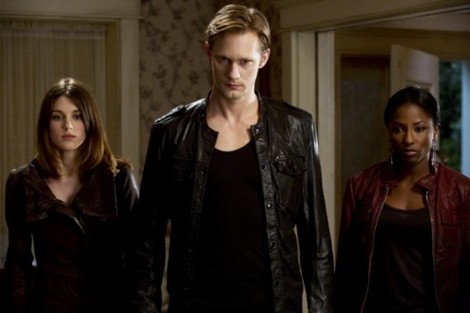 Tonight on HBO our favorite television show True Blood returns with the finale of season 5.  Tonight’s show is called ‘Save Yourself’ and we will be covering the show with all the up-to-the-moment details.

On last week’s show it certainly looked like Bill is going off the deep end.  It seems Bill is convinced he is the chosen one by Lilith.  We also saw Russell completely take down the Fairy Elder, who was BTW one of my favorite minor characters the show has ever brought in.  Sookie appeared before her to get some answers about the vampire out to eat her, but she struggled with getting coherent answers.

On tonight’s show the season coming to an end and we are sad.  The season was jam packed full of crazy, blood sucking action.  In the preview for this week’s show it looks like Bill may hurt Sam.  Bill tells Sam he should never have come to The Vampire Authority Headquarters.  Apparently Sam knows too much now and he cannot trust him.  If Bill hurts Sam, Sookie is not going to be pleased!  Will Salome and Bill have a showdown, an epic battle between Chosen Ones? No doubt. Who will be victorious?

Tonight’s episode is going to be another bloody exciting one, which you won’t want to miss. So be sure to tune in for our live coverage of HBO’s True Blood — tonight at 9PM EST!  While you wait for our recap, hit the comments and let us know what you thought of True Blood season 5!