American Idol Runner-Up Jessica Sanchez Earns Her Place On The Walk Of Fame! 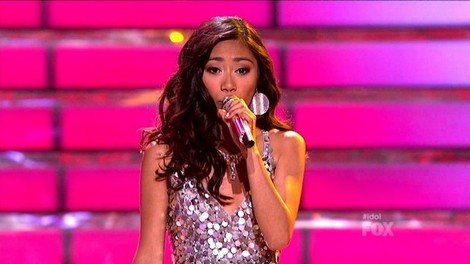 While it isn’t exactly a star on the Hollywood Walk Fame last season’s American Idol runner-up, the lovely Jessica Sanchez, has been awarded the honor of being included on her very first Walk of Fame.  And hopefully for the talented teen this honor won’t be her last!   Jessica was delighted to learn that she will become a part of the Philippines’ Walk of Fame in Quezon City!

Jessica is currently in the Philippines for the last stop on the American Idol Top 10 Summer Tour.  Jess is wildly popular in that country, not only because of her success on Idol, but because her mom, Editha Bugay, is a Filipina who immigrated to the United States and became an American.  The Philippines has a population of over 100 million (!!) and so no matter what happens in America she can always have a great career over there. Jessica’ dad, Gilbert Sanchez, is from Texas and was a soldier in the US Army.

Jessica had this to say when she learned of the honor: “I’m surprised by this, I’m just like I can’t even process this right now but that’s definitely awesome,” she said. “I would love to meet [the host of the project] someday and actually thank him personally.”

Good on you Jessica!