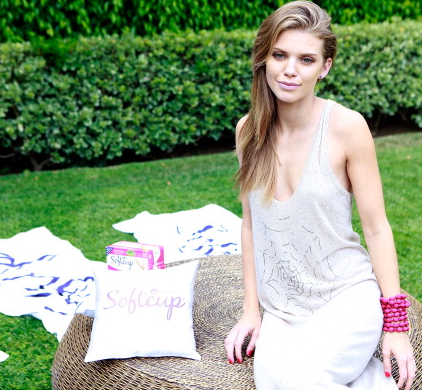 With the Emmys being Sunday night, the weekend was filled with pre-parties. One of the frontrunners for best pre-parties had to have been the two-day event hosted by The Real Housewives of Beverly Hills star Adrienne Maloof (who put her mansion on the market the same day priced at a cool $26 million).

AnnaLynne McCord and Shenae Grimes, co-stars of 90210, were both spotted at the Softcup Beauty Retreat Friday in Beverly Hills, Calif. The actresses enjoyed snacks and spa treatments, while also stopping by the Effy Jewelry booth.

The property was decked out with decorations, and the flowers were even bedazzled. The event was a sight to see, and McCord, 25, was even overheard gushing about Maloof’s home and how she would love to have one as gorgeous someday.

Many of Maloof’s Real Housewives costars were seen in attendance supporting their friend, including Kyla and Kim Richards, and Alexis Bellino, who just announced she would not be returning for another season. Other guests included “Law and Order: SVU” actress Diane Neal, “Wilfred” star Fiona Gubelmann, Taryn Manning and Charlie Sheen’s famous ex, Brooke Mueller.

Onlookers and friends at the event commented on how well Maloof was holding up through her divorce. Camille Grammer said, “I am so proud of how strong Adrienne is. She is so brave and she’s a wonderful mother.”