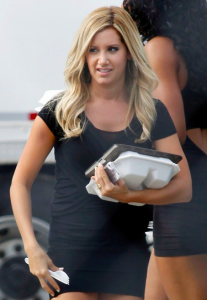 Ashley Tisdale was spotted catching lunch- and a whiff of something bad- in a little black dress while on set for Scary Movie 5.She was seen carrying takeout back to her trailer on Thursday (September 6) on set in Atlanta, Ga.

The 27-year-old tweeted earlier in the day, “It feels weird being at a club at 2 in the afternoon, u can smell the aftermath from last night #gottagetmydanceon.”

The movie will spoof Black Swan, and it has recently been revealed that Heather Locklear will be playing Tisdale’s mom. Other appearances will be made by the likes of Lindsay Lohan and Charlie Sheen. Although filming is just beginning, the film is due to release April 19th.