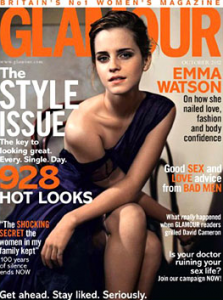 Emma Watson looks sophisticated on the October 2012 issue of Glamour UK. The 22-year-old opened up about body image, fashion, and more in an interview with the magazine. The Perks of Being a Wallflower star wore Zac Posen for the cover shoot.

The actress offered some mature advice to younger readers:

I wish someone had told me at 15: ‘You accept the love that you think you deserve’. I like this idea of quality control: that we don’t have to accept just anyone into our lives. But women have a natural tendency to want to nurture and take care of men. You think that the guy is going to come around and that you’re going to be the one that saves him – like the Oasis song. Actually I don’t think that you can change other people, but women always hope for the best.

But relationships aren’t what put Emma down. What most upsets her is girls putting themselves down. “It makes me sad to hear girls constantly putting themselves down. We have these unbelievably high expectations of ourselves, when actually we’re human beings and our bodies have a function,” she admits. “We say that the pressure is coming from men but actually it’s from each other.”

Also in the issue, which hits newsstands September 6, Watson reveals that her all-time favorite fashion moment was the white Alexander McQueen dress that she wore to the Empire Awards. Another favorite? “The vintage Ossie Clark dress (she) found in a shop around the corner from (her) house.”