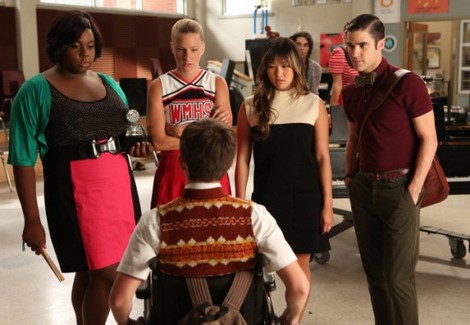 Finally tonight on FOX season 4 of GLEE is coming back.  This season GLEE will follow characters in two states but the powers that be are promising that it won’t be complicated to follow, it will have a natural feeling.   Season 4 will switch between McKinley in Ohio and New York City.

On tonight’s episode called “The New Rachel” the members of New Directions compete amongst themselves to become the next star of the glee club.  The New Directions will take on “Call Me Maybe.”  During open auditions, a fresh crop of students is introduced, including Marley (Melissa Benoist) and Jake Puckerman (Jacob Artist), Puck’s half-brother. Meanwhile, Rachel (Lea Michele) has a rocky start at NYADA and struggles to please her demanding dance teacher, Cassandra July (guest star Kate Hudson). She also meets Brody (Dean Geyer), a handsome upperclassman.

Tonight’s episode looks like it is going to be a fun episode and you won’t want to miss it, so be sure to tune in for our live coverage of  FOX’s “GLEE” at 9 PM EST!