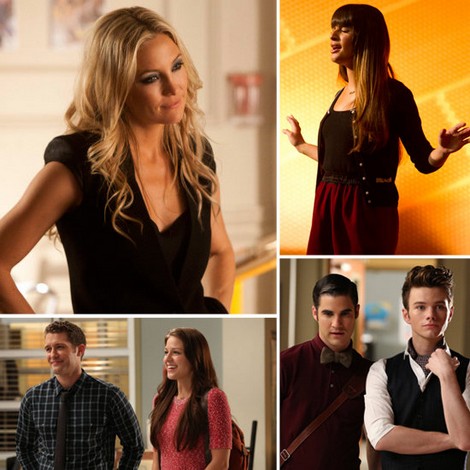 The season four premiere of Glee brought us above average vocals, a limp plot and some choice dialogue, but the one thing Glee never fails to deliver on is interesting character fashion. Did you also see that Rachel (Lea Michele) wasn’t dressed like a drunken homeless person for once? The reason for this was when Rachel grew up and moved to New York, so did her fashion sense.

Lea told People Magazine on Wednesday, before the premiere, “There may or may not be a little makeover happening. We do have Sarah Jessica Parker on our show this season, so it would only be right.” We all remember SJ Parker from the classic television hit show (and movies) Sex and the City (this is Celeb Teen Laundry, so you have most probably watched it, haven’t you? Nothing attracts people to a show like an age restriction…) Her fashion sense on the show became iconic and several television shows popped up during that same time period that tried to emulate Sex and the City’s awesome fashion, so it was only fitting that Ryan Murphy (executive producer/writer of Glee) jazzed up the fashion for the big arrival of SJ Parker.

Lea is very happy about this transition. She said, “I’m very happy. Now I can leave work and keep my hair and makeup and actually want to wear my clothes out to dinner and stuff like that.” This same fashion change will also take place in Tina (Jenna Ushkowitz), who’s staying behind in Ohio for her senior year at McKinley. Jenna told People, “She gets to wear bangs this year, and she… matures. We finessed her. She went from goth and all the layers and corsets to black dresses, and then we went into color.”  We’re glad the character of Tina, who has been neglected for two seasons, will get a chance to shine in her bangin’ new wardrobe. Ushkowitz added, “Tina is definitely [into] color, short, retro dresses. Definitely more flats… and no more knee socks. She used to wear a lot of vintage things, and I love that [the costume designers] have started to incorporate Marc Jacobs and more fashion-forward things [into her wardrobe].”

If only Ryan Murphy jazzed up the plot construction, dialogue, characterization and the intelligence of the show, we might have been ecstatic, but unfortunately, a hot dress or two won’t save our favourite show. Did you watch the premiere episode? What did you think? Let us know in the comments below.