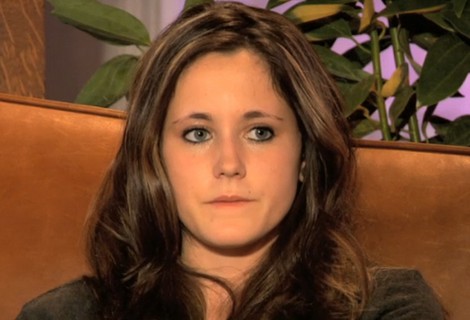 Jenelle Evans, the abused Teen Mom from the exploitative MTV show returned to North Carolina yesterday, and if rumours are to be believed, she moved on to a third new relationship. According to a Wetpaint Entertainment report, Jenelle announced just a few days ago that she was single and had broken up with Kieffer Delp, mere hours after she arrived in New Jersey to start a life with him.

In true Teen Mom fashion, Jenelle went on Twitter and hinted that she had moved on with a new man. She posted a picture on the social networking site and wrote “not Kieffer”. Gary Head was kicked out of the picture like a Kardashian with rabies when Jenelle took out a restraining order against him, so it isn’t him either! Who might this man of mystery be? James Bond? The Dalai Lama? Santa Claus? Actually, no, it’s Zeke from Orlando, Florida. The mysterious new Abercrombie and Fitch named boyfriend tweeted Jenelle, “Really craving some Chinese food… and @PbandJenelley_1 right now.”

Jenelle replied to his tweets, “<3 our texts r getting intenseeee.” Is this a ploy Jenelle? Is this how you make Kieffer Delp and Gary Head jealous? Don’t you think you should stop tweeting and rather focus on your son? Jenelle has always reeked of co-dependency issues and this is becoming even more evident as time passes. You know what? We’re actually happy for Jenelle. Perhaps this could be true love and happiness? Yes, she’s more co-dependent than Santa Claus and his elves, but she’s had a tough life.  Zeke from Orlando, Florida, might just be what Jenelle needs to break the cycle of dysfunctional relationships and insanity. His name reminds us of a cool kid with shades and parties held at the hottest clubs, but as we’ve learned from X-Factor and The Voice, never judge a book by its cover.

Let us know your thoughts in the comments below.