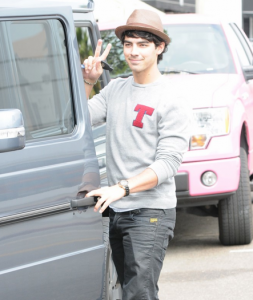 Joe Jonas leaves his brothers Nick and Kevin in West Hollywood, Calif. on Wednesday (September 5) and flashes a peace sign while getting into the car.

The brothers enjoyed a meal out at King’s Road Cafe. Tuesday Nick tweeted to his fans and revealed that the brothers would be spending the day working on new music. He posted, “Post- in the studio till 5 am. Breakfast with @kevinjonaslooking forward to another day of creating music. #JB2012.”

Later, Nick revealed a line of lyrics from the new album:  “Where ever you’ve been. Where ever you’re going. You never too far, anywhere that you are.. Is where I’ll be. #Lyrics #JB2012.”

Vanessa Hudgens and Austen Butler Get Cozy in Venice