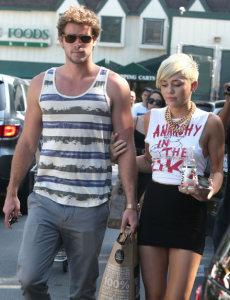 Miley Cyrus was spotted holding on tight to her fiance, Liam Hemsworth, as the pair walked to their car at Whole Foods Market in Toluca Lake, Calf. Tuesday afternoon (September 11).

The 19-year-old singer recently showed off her new, edgy look at the MTV VMAs, where she also talked with People about her pending wedding to Hemsworth.

“I’ve got so much planning to do with the tours and getting the record out,” she admitted. “I mean I’m really excited to obviously get married, but, I kind of already feel married, and I know we’re forever. I don’t really need the paper right now, so I’m just really trying to work.”

Miley is set to release a single sometime this year, with her album soon following. She says this album is her “favorite thing [she’s] done, probably ever.”