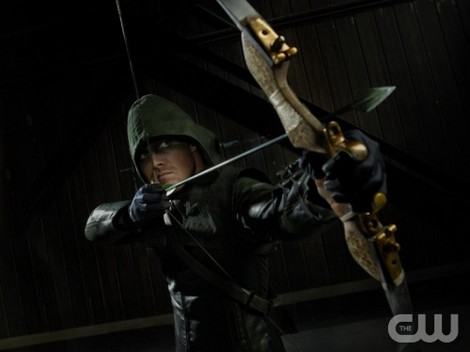 ARROW will be premiering on the CW Network  October 10th, 2012.  The television show is based on characters appearing in comic books and graphic novels published by DC Comics.  The series stars Stephen Amell as Oliver Queen, Colin Donnell as Tommy, Katie Cassidy as Laurel Lance, David Ramsey as John Diggle, Willa Holland as Thea Queen, with Susanna Thompson as Moira Queen and Paul Blackthorne as Detective Quentin Lance.

DC Comics has announced that they will be releasing a new digital comic book series based on the upcoming television show.

CBR News has exclusive first word that in October, DC will launch a brand-new “Arrow” digital comic series which will tie into the new CW show reinventing DC Comics superhero Green Arrow. The “Arrow” comic series debuts on DC’s comiXology-powered app on October 10, the same day that the series’ pilot episode bows in prime time, and it will be written by executive producers, showrunners and comic scribes Marc Guggenheim and Andrew Kreisberg

The digital comic will sell for .99 cents a chapter.