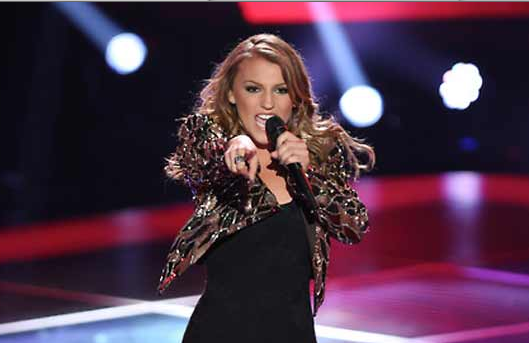 For those of you who were not growing up with Disney in the Cheetah Girls years, you may need a little refresher on who exactly Jordan Pruitt is. In the most recent episode of “The Voice” the 21-year-old rattles off her childhood accomplishments, like joining the likes of Vanessa Hudgens, the Cheetah Girls, and Miley Cyrus on tour. I most remember her for “The Outside Looking In” and her album Permission to Fly, but she has been flying under the radar for the past four years.

In Pruitt’s interview with Carson before her audition, she reveals that she left her record label (Disney’s Hollywood Records) to become a more mature artists and move on to “bigger and better things like this.” This statement begs me to ask the question: In what circumstance does an old Disney star find it necessary to go compete against amateurs on a reality TV show for a recording deal (especially after you just gave yours up)?

Once Jordan takes the stage, she belts out Katy Perry’s “The One That Got Away” and, after hitting a few rough spots, Christina Agulaira is the only judge to turn around. So it is team Christina for Pruitt, and Agulaira says, “I think the world could use another great pop star, and who better to coach them but me?”

Once again we have to ask: if Pruitt’s music career has not already taken off, will it ever? And is it really fair for a singer with years of world tours and album productions to compete on a reality show such as “The Voice”? Let us know what you think of the ex-Disney diva being on this season of “The Voice.”