Vanessa Hudgens and Austen Butler Get Cozy in Venice 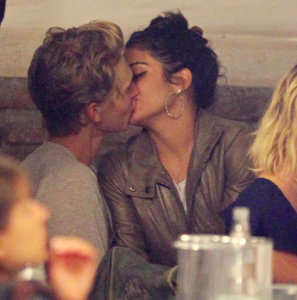 Vanessa Hudgens took a break from her costars Ashley Benson and Selena Gomez in Venice, Italy to have a romantic evening out at Harry’s Dolci Restaurant on the Guidecca Island on Tuesday night (September 4). Vanessa was seen kissing boyfriend Austin Butler throughout the meal.

Vanessa, 23, is joined in Venice by Benson and Gomez to debut their movie, Spring Breakers, at the 2012 Venice Film Festival tomorrow (August 5).

Zac Efron just returned home from Venice after promoting his movie, At Any Price, at the 2012 Venice Film Festival.